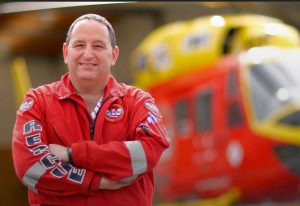 Dave Greenberg is the Director of Emergency Preparedness Services (New Zealand). Dave began his emergency services career when he saved the life of a stranger using CPR, on a street in New York City, when he was only 13 years old. After moving to New Zealand in 1990, he spent 25 years as a rescue crewman on the Westpac rescue helicopter in Wellington, completing nearly 4000 missions. Today he’s an Incident Management trainer and consultant, working with many private bad government agencies including the NZ Police, Civil Defense Emergency Management groups and New Zealand Search and Rescue (NZSAR). His book, Emergency Response, was released by Penguin Random House NZ in Oct 2017.

1. Why is validating multi-layers of an organization so important?

Validating multi-layers of an organization is important because when crisis hits every single person in the organization, regardless of their ‘day job’ can end up being involved. In New Zealand, our incident management system is called ‘CIMS’ – Coordinated Incident Management System – and smart organizations train everyone from the receptionist and mail clerk to the senior management team and CEO, in some form of CIMS. This ensures that as an event unfolds everyone is familiar with some of the terminology, and vest colors, and other things that make the incident flow more smoothly.

2. For businesses that don’t conduct tabletop exercises, what would you say to them in order to get them to consider starting an exercise regimen?

I have two words for organizations that don’t conduct tabletop exercises – “Stuff Happens”. Businesses who plan and practice for disasters are more likely to survive than those that don’t. An earthquake can take out your whole city, a flood your whole street, a fire your whole building or a heart attack one key member of your team. Good luck returning to business as usual if you have never exercised for things like these.

3. What’s the most surprising thing that has happened during an exercise that you have been involved in?

The most surprising thing that occurred during a tabletop exercise I was running was an entire Incident Management team became so focused on their written plan that they could not react to what was happening in the scenario. The incident plan said that in the event of a cruise ship disaster they would bring all lifeboats and survivors brought to ‘point x’. We chose to land the lifeboats and survivors at the closest point to the sinking ship, ‘point y’. It took many unplanned scenario injects, and close to 15 minutes, before the IMT began responding to the events as they were unfolding as opposed to the way they wanted them to unfold.

4. What can the 2018 International Crisis Management Conference attendees expect from your presentation?

Attendees to my presentation at the 2018 conference can expect to get a Kiwi perspective on the challenges of managing a major incident, with limited resources across a lot of miles. Thanks to our remoteness to the rest of the world, our varied terrain and our small population, New Zealander’s are known for their “# 8 wire” mentality – figuring out how to do things in a new and clever way, using nothing but the #8 wire that farmers use to build fences.  At the end of the session I hope that people have a few new tools in their incident management toolbox, or at least a few ideas of how to handle an incident given our unique challenges in New Zealand.

Register to attend the 3rd annual International Crisis Management Conference which will be held on April 24th and 25th in Boston MA.

Get Your Ticket Now!

To learn more about ICMC 2018, visit our conference page and don’t forget to check out the ICMC Professional Membership!

Join our community of Crisis Management Professionals. Expand your network and share ideas and information!

Are you sure you want to delete your Profile?

This will remove all of your posts, saved information and delete your account.

The delete cannot be undone.

Share This Post
PublicSite Members
{post-content}
No results found.
We use cookies to ensure that we give you the best experience on our website. If you continue to use this site we will assume that you are happy with it.Ok